Which is better? Does it matter?

While we don’t get this question often, it’s a valid question. A more likely question we get sometimes is, “Can we create a storyboard so we can see what the plan is?” The answer is usually yes, but there are times it doesn’t make sense. First let’s start with what a storyboard is versus what a script will do.

A storyboard is developed to show a client pictorially what may be shown on screen. These usually work well when we do product videos, especially when the finished video will need to be approved by a third party. Third parties to a product video might be QVC or the Home Shopping Network. Usually when one wants to create a product video to be featured on one of these channels, it’s a good idea to make sure the video matches their specifications and needs. It becomes costly to re-shoot or re-edit a video simply because it wasn’t approved prior to shooting. For instance the video below required a storyboard so it could be approved by management and shown to the retailer. The retailer had some input as to how it featured certain components that might help the product sell faster in their stores. They know their customers, so get them to help!

Here’s the storyboard that went with it: 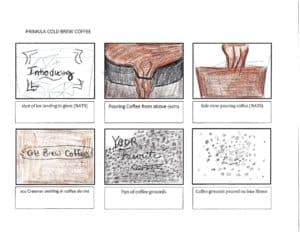 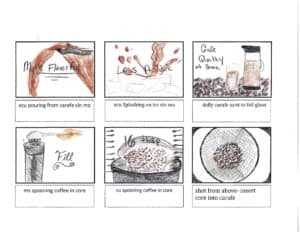 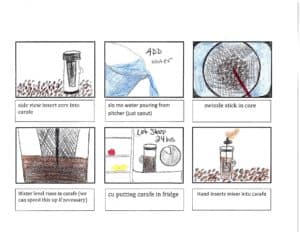 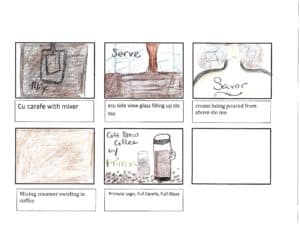 So now that we’ve discussed storyboarding, let’s shift over to scripting. Scripting is when we take what you do, how you do it, and/or why you do it and convert that into a spoken script that highlights the points your video needs to create. Spoken script can be you (or someone you designate from your business) on camera reading from a TelePrompTer, or it can be professional voice over. We have hundreds of professional voice over options to choose from and several languages. It’s important to choose which voice best represents your business. We can help with that as well.

One question that comes up when dealing with a script is, “Who should write the script?” Our recommendation is most frequently that we should write the script. We say this because we know how close you are to your business and sometimes we find people close to the work have a hard time formulating the correct message for the audience. For example, we’ve had some clients take a stab at their script only to include industry jargon and technical information that their target audience didn’t care about. What the target audience needed to know was, can you do what I expect of you, on time, and on budget? Those were the questions that needed to be answered, not the technical stuff. Sometimes the client is best suited to write the script, but most times, we can boil down the problem-solution for you making it less stressful during the shoot. Keep in mind, no matter what, the client has the last say in the script!

Here’s an example of a script for another product: 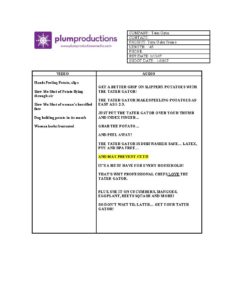 The concept is, tell the story, give someone the reason to buy your product or service. You’ll also notice that there are two columns in this script: a description of what you’ll see on the screen and the actual spoken words. This was a relatively straightforward script, but you get the picture. Here’s the finished video:

Wanna buy a Tator Gator now? We did!